Our trip back to New Zealand took over 6 months of planning. One dull day in Germany I got a little homesick and ended up booking flights to NZ. I found an amazing deal through Malaysia Airlines (umm… about that later) out of Paris and jumped on it. It was going to be €800 cheaper EACH compared to flying out of Frankfurt, so €1600 made it well worth the drive.

One thing I didn’t quite plan on was that we were going to be moving. It turned out that we had to empty our old house before we left, and move into the new house. Unfortunately, timing didn’t quite work out. We had nowhere to put our furniture in the new house. Thankfully the old tenants helped us out big time by moving the garage around and our stuff remained packed up in the garage for the three weeks we were gone. Big props go out to Nick’s workmates who helped us out with the move.  Still, it was a stressful week before we left. We were staying in lodging while we cleaned the house and ended up having to pay our old landlords because the yard wasn’t up to standard. You can’t cut grass or plants in winter! Oh well. We’re glad to be done with them and that house.

We hopped in the BMW and set off for Paris. Traffic was great until we got about half an hour from the airport. What a disaster! The French around the Paris ring route really do not know how to drive and are scary aggressive. At one point Nick had a taxi tailgating him, so he put on his brake lights as a ‘warning’. Well, the taxi driver didn’t like that! He ended up passing us as soon as Nick got over, then went back into our lane and slammed on his brakes in front of us. Nick and I in unison ended up pulling the finger at him and yelling – probably would have been funny to see but we were more than ready to get out of Continental Europe!

We spent the night in an Ibis by Charles de Gaulle Airport. It had 14 nights of free parking included, and then after that we needed to pay the day rate. It ended up costing us about €50 on top of the €100 or so that we paid for the room. €150 for parking and a hotel room for a night seemed to me to be a pretty good deal! Tolls were about €40 each way, so €230 was definitely a small price to pay for the €1600 in savings on the airfares.

The next morning we headed out on the free shuttle that took us to the terminal. It was the wrong terminal, so we had to take a free train to the next terminal. The airport was a bit of a trip, but easy to get around. We had our bags wrapped so no one could use them for any kind of trafficking. My passport also caused some problems – to this day we have no idea why, but they had to do a special input in the system to allow me to travel?!

We flew on a Malaysia Air Airbus A380, which was quite the experience. I managed to get us seats in the upper portion of the plane, which were in a 2-4-2 layout or something like that. All I know is we were in the 2 part of the layout, which meant no strangers to sit next to – score! Going upstairs through the rear of the aircraft involved a winding staircase – it felt like we were going up to a tree house.

The journey was comfortable, apart from the fact that the blankets were really just pashminas. I wanted something heavier so I could pretend I was in bed – haha. The meals were very Asian, as you would imagine. I can’t remember what we ate exactly as I ended up starving myself a lot of the journey due to the food options, but I distinctly remember Nick having fish curry and rice for breakfast!

Thirteen hours later we arrived in KL on time and wandered the airport, which was very modern with a lot of decent food options.

Our flight was delayed for about three hours. It was kind of nice having the stopover though, because it was only supposed to be an hour long. Apparently the plane had mechanical difficulties, so they switched planes after not being able to fix it, and then it miraculously came right. I was already unimpressed with the airline because I was starving by then, and that made it even worse (and yes, I had these opinions before their aircraft went mysteriously missing).

The journey back to Auckland was on a much older plane, but we had the exit row and again, a two-seat configuration. Nick liked the journey a lot because of all of the extra space he got. I again slept most of the time and didn’t partake in the food offerings. Again, they offered the same pashmina. The entertainment screens were small but the seats were decently comfortable. I think they were made for shorter people – which was nice for me for once!

The journey from KUL to AKL took about 10 hours. We arrived in Auckland to mild weather at about 1am, and ended up running into a couple of problems at customs. I declared some food, mainly my worry was about Parmesan cheese in a can. I took it out and showed it to the customs man, and he said it was fine but put our bags through the x-rays. He was super nice and actually was from just by my hometown. Well, the supervisor guy insisted he saw something on the screen that I hadn’t declared. It was ‘hexagonal’ (so I think he thought it was a honey jar). I’m sorry, but I’m from New Zealand. I know the rules back to front. I would never bring honey into NZ. I won the argument when his search of my bags produced nothing.

After more than 24 hours of travel, we were able to grab a shuttle from outside the airport terminal. We were the last two passengers to hop on, which was nice. It was so nice to be all around kiwis again and hearing the familiar accent and general cheerfulness.

I had booked our hotel in Auckland for 3 nights at the Citylife Auckland Central. It’s where Ernst & Young had us stay when we had events in Auckland, and I always enjoyed it. This time was no different – we had an amazing stay and everyone was helpful. Nick couldn’t get over that we didn’t need to tip them, that it was just part of their job to be that nice!

I particularly struggled with jet lag for the first 2 or 3 days. I woke up wide awake at 3.15am each morning we were in Auckland. My typical thing to do is have a shower, and that worked. Nick got up and retrieved us breakfast like the good hunter-gatherer that he is, and we tried to have as normal of a day as possible exploring the Auckland CBD.

The Sky Tower is the central focal point of the Auckland CBD, so we had to go and visit that. It has panoramic views of Auckland, out over the beautiful harbour and looking out towards Rangitoto Island. Spectacular! And while Seattle has similar views, Seattle can’t boast about the same kind of climate.

I know a lot of people in NZ have a dim view of Auckland, but I have always really liked it. The harbour, the proximity to the beaches and the fact it is a major world city are real selling points to me. 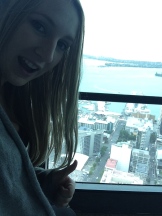 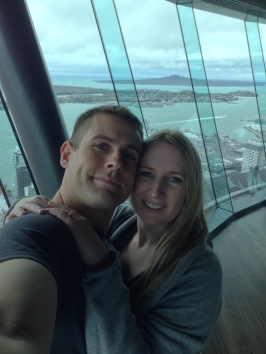 We had a late lunch at a Mexican place down by the wharf. It seemed to be a wannabe-Chipotle, but it was lacking in flavor a little. It definitely needed some help in the spices department! It was necessary to make a supermarket stop to pick up some of my most missed favourites. I think I’ve definitely got used to cheaper prices at the supermarket, there was a bit of a sticker shock at a 600ml Coca Cola being around $4.00(!!) but we eventually got used to it again.

One of my favourite restaurants in Auckland is Monsoon Poon. There’s also one in Wellington. It’s a little expensive, but it’s delicious! We had amazing Indian curries and a couple of drinks. It was at that stage that Nick realised his accent wasn’t being understood in New Zealand. He ended up with a completely different beer to the one that he ordered. Oh how nice it is for the shoe to be on the other foot!

After dinner we were a little exhausted and ended up heading back to the hotel for an early night of junk food eating and cider drinking.

Day two was an exciting day in Auckland, because it’s the day we were picking up our rental car! Having wheels meant we could get out to my favourite places and away from the city center, which while fun, isn’t where the beauty is.

First stop though was KFC. KFC outside of NZ and Australia just isn’t the same. You see, downunder we like to salt our chips (fries). A lot. With chicken salt. KFC has the chicken salt recipe mastered, and so KFC will never be the same for me without it. I ordered a large chips and it was incredible. I felt whole again.

We headed off to Mission Bay to check out the beach. I edited this to add that this particular beach was about 10 minutes from the hotel we were staying at. The fact you could walk out of your office and be at the beach in 10 minutes is huge. We sat on the beach for about an hour and ended up bright red for the next 3 days (for Nick it lasted for about 3 weeks, but now he has a permanent tan – whereas my tan has already gone). Did I mention how much I miss the beach? I MISS THE BEACH! The beach is where all life’s problems are washed away by the soothing sound of waves, children’s laughter, seagull chatter and the soft warm breeze. Wherever we settle one day  has to be near the beach. 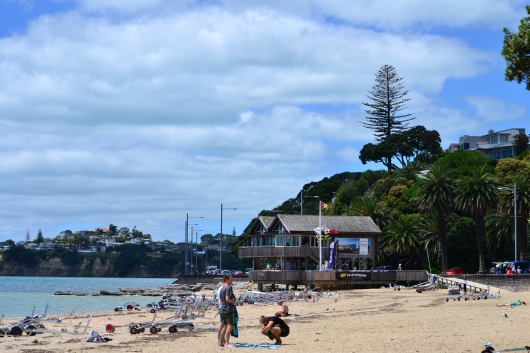 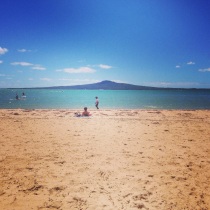 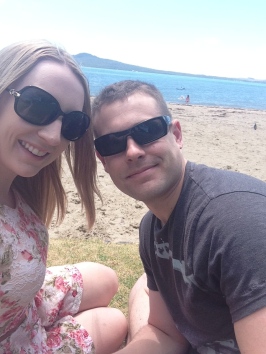 We hopped back in the car and headed to the North Shore, to Takapuna Beach which was buzzing with teens, jetskiiers and yachts. There were tide pools to explore, but there wasn’t much activity going on in them because the tide was up too high. I loved seeing all the families of all ages and sizes out on the beach, chilling out. One girl came running up to her mum exclaiming, “Mum! Mum! I found a scallop!”  Another couple built an epic sandcastle for their young son, only for him to walk over it immediately. Ahh, summer!

I wanted a view of the Sky Tower and city, so we headed to Devonport. After we took some photos there, we realised we could head up to a viewing point on Wellington Hill. It was a tiny winding road to get up it, but once up the top, it had breathtaking views. Like the Sky Tower, it had views of the harbour but also of the CBD itself. Definitely a romantic picnic spot if the wind wasn’t up! 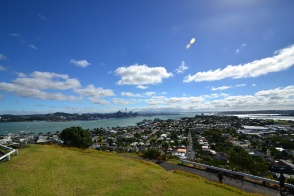 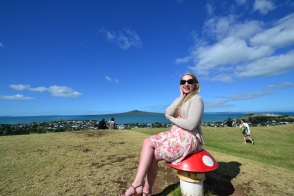 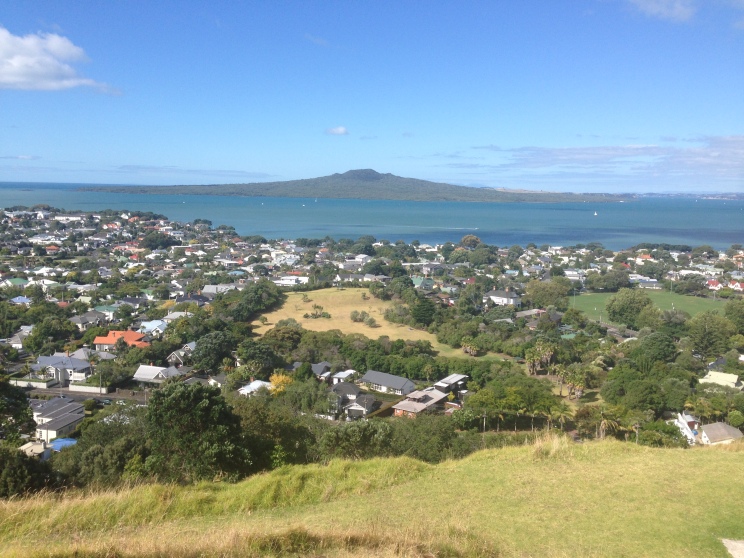 After a big day of sightseeing and getting sunburnt, it was time to return to the hotel to pack our bags and get some sleep before our next adventure – our day trip to Coromandel, which will be covered in Part II!