It felt like September took forever to arrive. I hated wishing away the good weather that summer brings, but the months leading up to Greece really dragged. Perhaps it was because I finally had a job again, or perhaps it was the fact that I’d waited what felt like my entire life for this journey.

Greece was always in my top three. Santorini specifically, but I just wanted to go to Greece. I think that a lot of Kiwis and Aussies feel the same way. It didn’t seem to be much of a coincidence that the majority of the English speaking accents we heard seemed to be one of the two.

On September 15th we dropped Charles off to the boarding kennels and headed towards Frankfurt Hahn. We had a late afternoon flight, so for once we didn’t have to worry about the awful early rise to get out to the airport. As it turns out, we needn’t have rushed. For the first time we had an incident with Ryan Air. It couldn’t be helped though, and I was thankful that when they discovered a fault with the airplane that we swapped out planes. Even if it did take two hours.

Corfu was our first stop. The flight was about two and a half hours long. Due to the unexpected delay, we ended up hungry on flight and had to buy Ryan Air food. Everyone around us was starving, it almost felt like the apocalypse was about to happen with the stares we got when tucking into our microwave fries (oh, the joy – not). We were thankful that we did give in because we arrived in Corfu and didn’t end up being able to find a quick bite to eat anywhere at 10pm at night!

Our hotel was in Corfu Town (which was a little deceiving). The hotel (Aquis Mon Repos Palace) was modern and had an amazing free breakfast, but was further out of town than it made out to be online. We were definitely one of the further away hotels from the city, but it ended up being a blessing in disguise. The next morning we woke to find that the hotel was right next to the bay. The water and weather meant it was warm enough to dip into the ocean right next to our hotel! The water in that cove was the warmest we found in Greece. Despite the 2-3km walk into the town, I would definitely stay there again.

At night we ended up enjoying some alcoholic beverages on the balcony that had a view out to the sea. The temperature was just perfect – the kind of temperature where you feel like you are enveloped in a warm blanket, except you don’t have to wear a warm blanket and you also aren’t sweating. I like to call it temperature equilibrium.

After our delicious breakfast and swim in the cove, we headed off for a walk into the town to see what we could find to explore. The walk was around the water’s edge. Inhabitants of the water included plenty of fish, boats and elderly swimmers– they literally sat in the water all day. It must be good for the skin I suppose.

We eventually came across the town and discovered an interesting fortress area. Next to it was a very enthusiastic yoga man doing sun salutations. Nick likened him to the ‘boom’ guy off Couple’s Retreat (you’ll know this reference if you have seen it). Either way, we weren’t intrigued enough to go ruins exploring, but I’m sure it was a very cool place.

The town drew us in. It was full of alleyways crisscrossing back and forth full of goods that they were trying to pry off to cruise boat patrons. I did end up buying a pair of sandals but not surprisingly they only lasted a week. I also ended up buying a beach towel – the hotel didn’t allow their towels to go to the beach. I ended up buying a majestic dolphin towel for the bargain price of €6. The conversation for the towel went like this:

Eventually, I got hungry. Anyone who knows me well knows that a hangry Emma is not a nice person to be travelling with. We decided to head back in the direction of the hotel to a line of restaurants near it. We ended up finding a place that had a lamb special, so naturally it was the number one choice.

The lamb was delicious! It was a lamb shank served with ridiculously rich flavoured potatoes. I didn’t realise that Greek food was so darn rich, which I eventually got used to but it was a bit of a surprise. One of my workmates said that I would be sick of Greek food within a few days. He was wrong!

Due to our holiday being an anniversary retreat, we stopped at a Greek supermarket for some cheap mixers for our rum and some water for the next morning. A good to know thing is that most Greeks have to buy bottled water due to their water supply being compromised with salt. That means that bottled water is extremely cheap in Greece compared to other European countries!

After a few beverages on the balcony, we ended up at another restaurant near our hotel for dinner. We ended up in a restaurant playing a soccer match – it felt like we were the only non-locals there – that only made it all the more interesting! Nick had a moussaka (eggplant dish) and I had a souvlaki platter. The house wine ended up being a huge 1.5L carafe of rose wine for a ridiculously low sum of about €5 – you really can’t beat Europe’s wine prices!

There was only one thing to do after a day of exploring, eating and drinking – a romantic stroll back past the water and sleep. 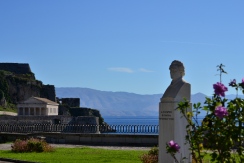 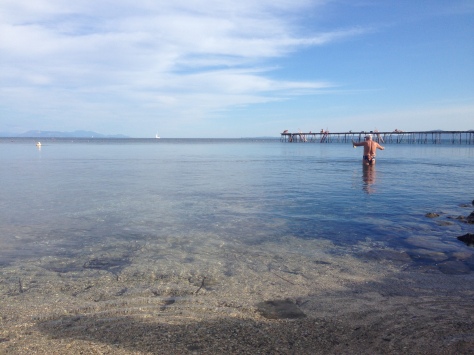 Casual local fishing in his speedos

Our two nights in Corfu were up, so after a morning swim in the cove near our hotel, it was time to check out and explore until our evening flight.

We decided the best idea was to rent a car for the day and see some more of the island. The hotel called up a rental car place that delivered a car right to the hotel as we checked out. For €5 extra we organized dropping it off at the airport so we could save on the taxi cost.

Armed with a map and no real plans, we ended up deciding to take a chance and head out to Agios Gordios beach. With no real expectations, we set out and enjoyed the sights.

The beach ended up being beautiful – despite an abundance of wasps. Nick managed to get some snorkelling in, while I lay on the beach to soak in the rays. While laying on the beach, I made some interesting discoveries. First of all, there were a lot of Russians. Secondly, a lot of Europeans like to buy watermelon on the beach. So much so that there was a man yelling out ‘watermelon!’ with a stand and people would go and buy it from his stand. He also yelled out that he had donuts. Interesting two product lines.

It’s really exhausting laying in the sun with nothing to worry about, it really makes you hungry (yes, I’m being sarcastic as always.) As soon as Nick was back, we headed off to a little hotel/restaurant that was by the beach. For a total of €15 we had a delicious lunch with several dishes, including my now favourite Greek food – dolmades. Who knew that rice stuffed in grape leaves could be so darn delicious? 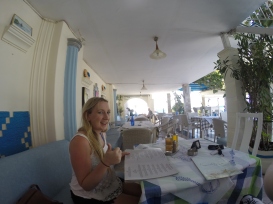 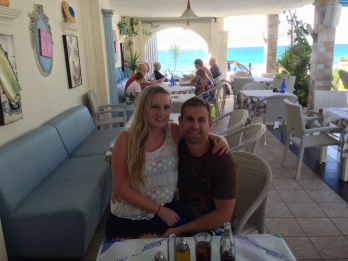 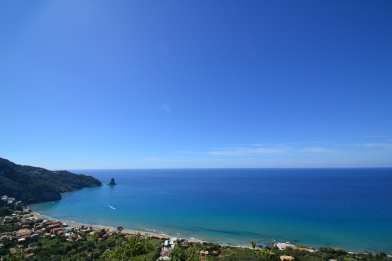 It would have been rude to stop at just one beach, so we set off again in our little red magic machine. Glyfada was the next stop. Unfortunately the gps took us an extremely odd way. The road was so narrow that the only way we could pass another car at one point was to rub mirrors – not ideal in a rental car! At another point Nick and the other driver had a conversation about it being a lovely day – everyone’s just so nice when travelling.

We took one wrong turn on the way. All those little narrow streets made it quite confusing. We ended up heading up the hill instead of down towards the beach, but it wasn’t that bad. We ended up at a place that was a look out point for the entire island, and despite the company (lots of grumpy Germans) it ended up being a cool stop.

The beach was nice, but I’m not sure we would ever go back to it. It had that ghost town feel after what would have been a busy season. It seemed to be an extremely windy beach, compared to the first one, so it wasn’t all that enjoyable. Still, we ended up enjoying a cold bevvy while listening to the waves crash – definitely not something to complain about!

After soaking up some more rays, it was time to head to the airport for the next stage in our Greece journey. Next stop… Athens!

One thought on “Greece Part I – Corfu”