If you have seen the cult-classic teen movie Eurotrip you will know that the lovable characters come across an awkward situation. When trying to hail a ride to Berlin they find themselves in Bratislava, Slovakia. They end up living like kings on the $1.83 they could scrounge together amongst themselves. One line, “It’s good you came in summer. In the winter it can get very depressing” was a quote we probably should have listened to.

My first mistake, and I’ll freely admit it, was to choose to do the trip on our own. I decided I wanted us to save $30 each, which was the difference in price between a guided tour and an epic train journey. This is where expectations did not meet reality. I thought that we would have some kind of outstanding travel adventure on the way from Austria to Slovakia. In the end, the train trip was actually very comfortable with next to no one onboard and interestingly enough there were no refugees on this journey. I guess not even they wanted to end up in Bratislava.

Our journey set out from Wien Hauptbahnhof which is the main train station in Vienna, and where we had arrived the day before from Budapest. The train was sitting on the platform ready for our arrival and we quickly found free seats. I noticed that the entire cabin was pretty much tourists. There was an American couple seated across from us that gave us comfort knowing we were in the right place. Our tickets cost €13 for the return one-hour train journey and it included all day travel in Bratislava on the trams and buses.

It was dreary that morning, but when we arrived in Bratislava it seemed to be darker and more depressing. I had read my Rick Steves guidebook before we left – Bratislava was included as a tiny chapter in our Budapest guide. He had mentioned that Slovakia was such a drain on Czechoslovakia that the Czech Republic severed the country, as it was sick of getting dragged down by the poor little brother. (I’m not sure if that is true, but Rick seems a pretty smart guy). While Prague has a dark underground, and Budapest probably does too, Bratislava felt like we were in another universe. Perhaps it was the weather, but this place was the most depressing place we have ever been in Europe. It’s the first time I have felt truly homesick in a very long time!

Nevertheless, we had a few hours to explore the place so off we went. It was easy to catch the bus outside the train station straight into the center of town. I believe Rick said the walk would take about 15 minutes but the buses were regular and included in our ticket so we jumped on.

There was no one around when we got into the city. We quickly found the Tourist Information office for Bratislava and I kid you not – there was nothing actually in there. We were looking for anything to get out of the bad weather and there wasn’t even any kind of interesting museum brochure in there. That was that idea! We headed out into the glorious conditions and walked around. Again, no one was around. It felt like a ghost town and considering it was the middle of July, I can’t imagine what it is like in the off-season. 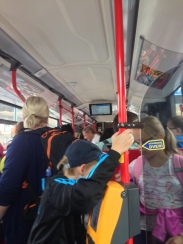 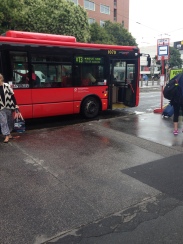 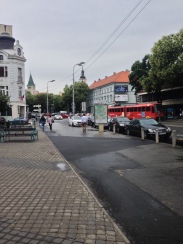 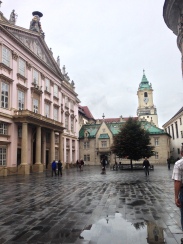 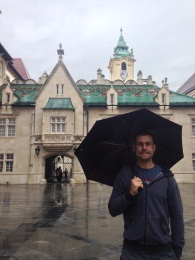 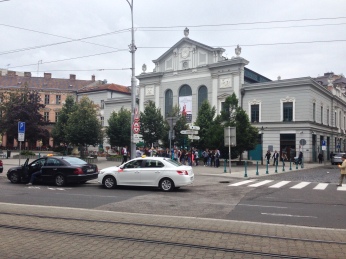 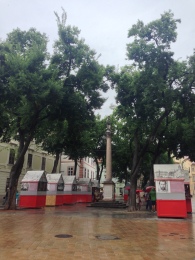 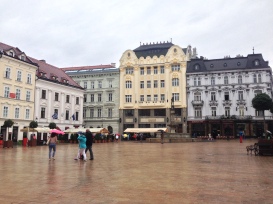 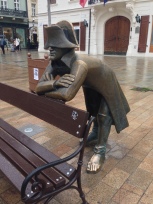 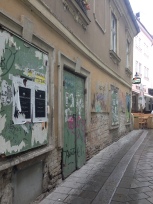 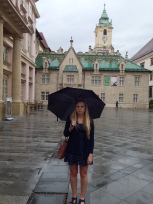 I did know that the Bratislava Castle was one of the draw-cards for tourists. There were lots of street signs pointing the direction, so we decided to start following them. We ended up on a main street with trams going past, so Nick suggested that we get on them to avoid a steep uphill climb. I wasn’t so sure, but we jumped on anyway – we may as well have an adventure in this place!

Things seemed to be going just nicely, Nick smiled at me as we kept seeing the direction signposts for the castle. Then things went awry. Instead of going uphill we went through the longest, darkest tunnel ever and ended up popping out in an industrial area of Bratislava. I was worried we would be kidnapped and have our organs harvested, or perhaps I would end up in my very own ‘Taken’ movie nightmare. This wasn’t exactly where we wanted to be in a place that seemed pretty darn dodgy. We got off at the first stop and looked around for anything familiar. Of course, everything was in Slovakian. All we could do was wait for the next tram going back the other direction. Of course, all of the trams seemed to be different numbers so we stood looking lost for what seemed like forever. Eventually we were saved by the tram and ended up back where we were. We never did make it to the castle. 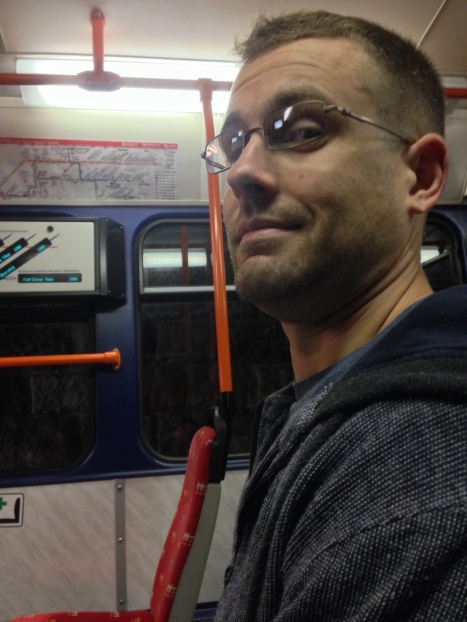 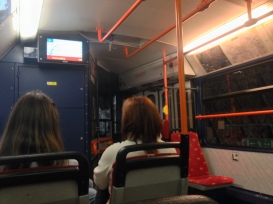 Still in the tunnel 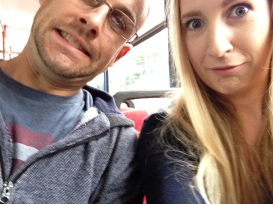 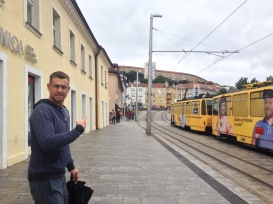 We ended up window shopping for awhile, waiting for other people to hopefully start coming out from well… anywhere. Eventually there were some more people walking about, I’m guessing a river cruise turned up as we ended up being next to some Australians. I wanted to buy something from Bratislava but in the end there was nothing that I wanted to buy, and it wasn’t as cheap as Eurotrip made out. In fact, I think them changing to the euro was probably a bad idea.

Hoping to find something of value about Bratislava, we decided to try out some local food for lunch. Of course we were probably in the tourist trap area, but the food was pretty good. Nick was raving about his goulash and I had some pierogies and garlic soup that was served in a bread bowl. It was okay but I feel like the food was probably just stolen ideas from surrounding cultures and countries. 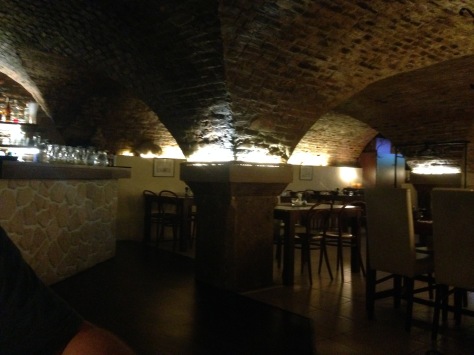 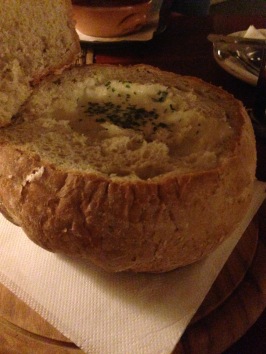 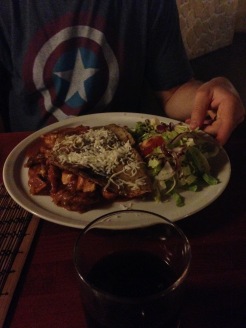 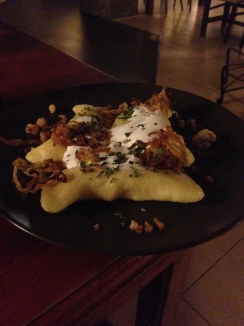 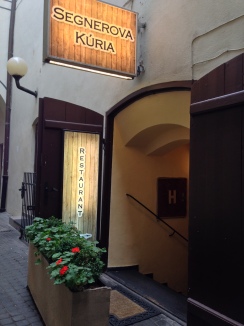 After lunch, my homesickness got to all new levels and I decided that we had to leave. I almost cried as my wifi seemed to be failing in this city, my phone was so depressed it didn’t want to work there. Thankfully our tickets could be exchanged for the earlier trip back to Vienna – something I didn’t realize at the time of purchase but it was good to find out, as I didn’t want to spend another hour there. I felt sorry for the backpackers who look bewildered as they were walking through the same streets that we had earlier, especially since they were clearly going to be staying there.

Nick and I ended up in a fit of laughter as we recognized the American couple from on the train earlier ended up on the same bus and train back with us. Clearly four hours was too long for them also!

As we arrived back in Vienna I felt a huge wave of relief. It is crazy, but after more than two years of living in Germany, despite not speaking the language German has become familiar enough to us that we are comfortable with it. It is crazy that it is such a different cultural feel only an hour train journey apart.

Our tri-city journey was coming to an end. The five days flew by and yet again, I wish we had had more time in Budapest and Vienna (although I can’t even pretend that we truly experienced Bratislava).

One amazing thing worth mentioning about Vienna is that they have the most unique system I have ever heard of for their train and airport connection. At one of the metro stations in the city you can check in for your flight (depending which airline you fly with) and there is a baggage drop right there at the train station. You check in like you were at the airport, as long as you have the airport link train ticket. We were able to check our bags and then walk on the train with just our hand luggage and not worry about our bags at all until we arrived at Frankfurt Airport. The bags are transported in a special train that has the same rules and regulations as airport luggage carriers.

Unfortunately for us, our flight was delayed due to bad weather and our flight that was supposed to leave at 7pm through Austrian Airlines didn’t end up leaving until close to 11pm. I was starting my new job the next morning so it was horrible timing! Austrian Airlines were a wonderful airline to fly with. The airhostesses of course used the Austrian dialect that was cool to hear used in a formal setting. I would absolutely recommend flying them, and again we got a great snack and full beverage service on a short one-hour flight.

Now I am up to date on the blog, it’s ready to feature our next adventures. We have a busy couple of months coming up with travelling almost every weekend. I can’t wait!

Until next time, e noho rā!