I had always wanted to visit Copenhagen. My brother had a friend in high school who was sent overseas on a student exchange there. I never knew anything about it until then, and we ended up googling photos of Denmark at that time. It looked so foreign to us. The canals, the vibrant old wooden buildings, the history. The history! It’s truly something that is hard to comprehend when you grow up in a country where the oldest buildings are from the 1800s. It had been a bucket list item from the beginning, but I had crossed it off several times as it wasn’t the easiest place to get to. As time went on, we have been able to move on to those more difficult to get to places!

I booked an interesting journey for our Scandinavian adventure. I booked open jaw tickets with Lufthansa Frankfurt>Copenhagen, Stockholm>Frankfurt. Most airlines make this cost prohibitive, but Lufthansa seems to be a company that makes it cost effective. I recommend using the advanced search options to do this. We were also going to fly Copenhagen>Bergen with SAS Airways and Bergen>Stockholm with Norwegian Air, but more about that in future blogs.

We set off on a beautiful morning in Frankfurt and after a quick one hour flight, we had landed in Denmark. It was immediately clear that Denmark is an advanced nation compared to others in the area (cough, Germany, cough). It seemed like cash was unheard of and everything could be paid with by card or bill pay from your phone. Of course, you couldn’t use bill pay with a foreign account, but we did get by in Copenhagen with the equivalent of $20 in cash. Don’t exchange too much money into Danish currency!

On arrival we had the option of taking the metro or train into the city. Tickets were easy to buy in the terminal and not expensive – about $5 each. There were alleys that lead down into the stations and we were quickly on a 20 minute train into the city. Our hotel, the Scandic Copenhagen, was about a 500m walk from the central train station and we were ready to explore the city!

I didn’t have much of an agenda for Copenhagen. All I wanted to do was soak in the vibe that I had read about, and see Nyhavn, the beautiful canal lined with colourful buildings. We set off from the hotel, without a map, and decided to see where our feet would take us and follow the crowds. This is a unique form of travel for us – usually we have our days structured with some loose allowance for going off course. I really enjoyed not having that. We ended up covering a lot of the city and seeing a lot that we otherwise would not have.

There was an Italian market in a little square area. It was full of delicious foods and everything could be paid for by credit card – that’s so awesome when you are travelling! It was in front of an Italian renaissance art gallery that was open for the day for free, so we went in. It was full of busts and other types of marble carvings – it was all very beautiful and we were glad we went in. We also passed by one of the royal palaces. I’d always been aware of the Danish royal family as an Australian commoner married one of the Prince’s after meeting him at a bar during the Sydney Olympics!

For lunch we found a gorgeous little pop up bar under the river with it’s own little ‘beach’ like what we saw last year in Vienna. We decided to try the local open sandwich from this bar and enjoy the river traffic going by. I thought we were about to witness a terror attack. We heard a bunch of screams coming from one of the boats full of tourists – high pitched screams. Then there was a small “thunk” sound, followed by more screams, and then a much louder THUNK! Then the screams really erupted! I guess it turned out that the motor failed on the boat and it was hitting the side of the canal. It was all quite dramatic. We actually kind of laugh about it now. “Arrrrghhhhh!” “THUNK!”. Anyway, it was a yummy meal. I liked Nick’s better. I went for the vegetarian option and his roast beef definitely outdid mine. 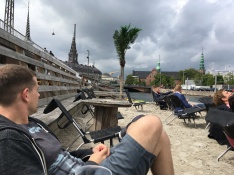 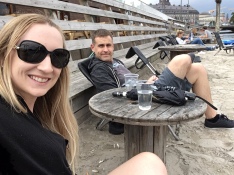 After lunch, we rolled out of the bar and headed towards the crowds again. We eventually sniffed out way to Nyhavn. It was beautiful, even if we did get stuck in some showers. There seemed like a lot to eat along that area and is probably where most tourists go to have a Danish food experience. After we finally made our way there, we spent the rest of the day window shopping through the pedestrian-only streets. We also ate at the Hard Rock for dinner as I had a coupon (haha) but it was probably one of the worst we have been to. I don’t recommend it. We headed back to our hotel with a bottle of wine in hand to watch the sunset drop down over the city of Copenhagen (which didn’t happen until about 10pm!) 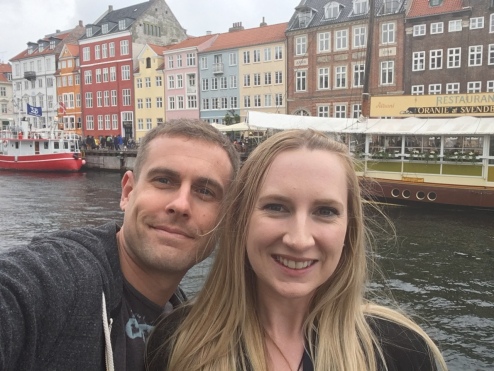 The next day we set out after breakfast for Tivoli Park. I had bought tickets online before we left so that we could pretty much walk straight in, but they didn’t open until 1100 on Sunday. We went to a grocery store (our usual travel thing) to waste some time and then walked in at opening time. We had planned to spend an hour or so checking out the park. It was a must-see as it is the second oldest theme park in the world, and apparently Mr Walt Disney himself may have got some of his ideas from there.

One thing about travelling is that sometimes you just don’t realise how great a place is until you’re there. And then you end up having your plans go awry. But that’s ok – we ended up having the best day! We were walking around and ended up realizing that some of the rides looked actually pretty awesome. One ride was going to cost the equivalent of about $10, but you could get an unlimited rides pass for the day for about $30. We had already paid the entrance fee of around $15 before we arrived, so in total it was about $45 for a full day’s entertainment. Nick ended up going on every single ride in the park and I went on all but two of them.

There were random peacocks and rehabilitated birds wandering the park. Everything was very relaxed. Rides were long and felt like they were worth the cost. There weren’t any 1 ½ hour long waits like in the USA. The choo choo train went around the tracks three times, as opposed to once. Kids weren’t wrapped in cotton wool. It was amazing.

As we weren’t planning to stay long, we didn’t bring food with us. We could have actually done that. However, the food wasn’t horribly priced considering there is a captive audience. We paid about $10 for lunch for the both of us and about $15 for dinner. We also bought a refillable soda container for about $7. We were able to refill it every 15 minutes for the entire day!

Food was never an issue, like at other parks we have been to (Disneyworld anyone?!). Food places weren’t packed and there seemed to be somewhere different to eat every few steps. There was even the ability to go to Wagamama from inside the park and walk back out into it. Lolly shops were everywhere with a lot of different exciting treats. 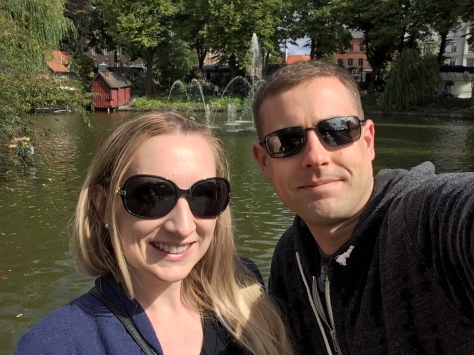 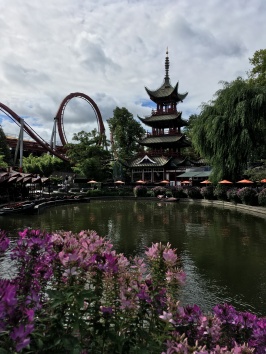 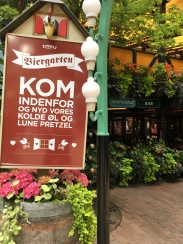 The German area of the park

This place was styled like the Zugspitz in Germany! 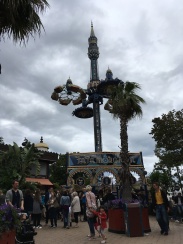 Fish n chips in the Chinatown area of the park 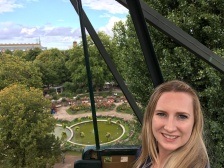 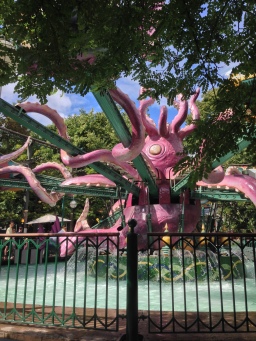 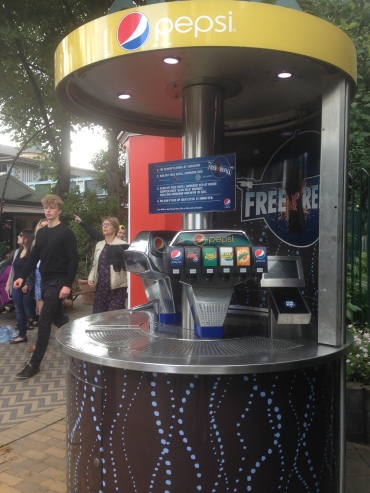 I would definitely recommend visiting Tivoli. It was a fun day out for the both of us, I even went on my first rollercoaster that had loops there! Yeah, I’m a late bloomer. 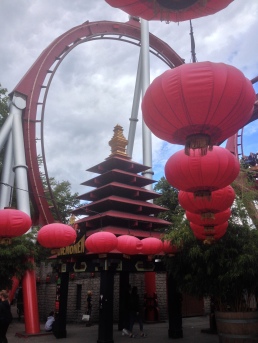 Two little things to note. Copenhagen is well known for it’s liquorice oddities. I sometimes have a craving for liquorice as my mum loves it. In Scandinavia they love salted liquorice. It’s really different. Try it! 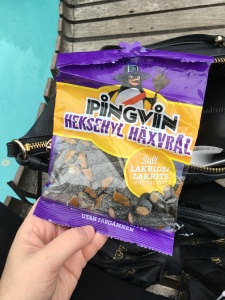 Secondly, Scandinavian keyboards are ridiculously hard to use! Where on earth is the @ symbol? I had to copy and paste the @ symbol off google so that I could access my email account. These are the hilarious things that travelling bring up:

My next blog will be on the next part of our Scandinavian adventure to beautiful Norway! That post may take awhile as it covers a lot of information and the most beautiful photos we have taken in Europe to date.