Nick worked night shift for a couple nights, so we woke up late on Saturday. I had decided to do the same as him sleep wise since I’m not working. Naturally, when we woke up we decided we’d go to France to do our grocery shop. 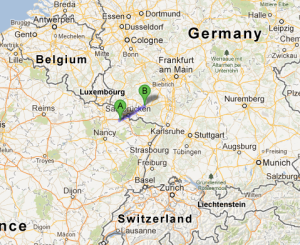 Our Garmin told us it would take an hour, and it was correct. I’d heard about Cora through Facebook, so we decided we’d go for a little tiki tour.

(For those of you who aren’t New Zealand readers, this photo may help you to figure out what a tiki tour is:

Quite simply, it’s a road trip).

Wow, was it worth it or what! We ran into two tolls on the way (€0,70 to get into Saint-Avold and also to leave) but they were nothing compared to what we’d been experiencing in the San Francisco area! I was quite excited when we went through the toll, hearing the French woman’s sweet voice saying ‘Bonjour’ and ‘au revoir’. Apparently I was excited the whole car ride, according to Nick, but I dispel that 😉

When we arrived, Cora was surrounded by beautiful fields of dandelions. I had to be an embarrassing tourist and take a photo on the way into the store:

Cora was… MASSIVE! It’s again like a Super Walmart, just like Globus is in Germany, but even bigger, and more spectacular because it just was. We spent almost three hours in this store! Some of our fun finds: 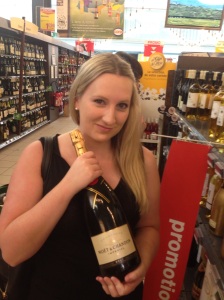 The Brie was about 1kg. Note the price for a kilo of brie! Nick was rubbing a bull’s belly, because he could. I’m holding a super sized bottle of Moet , my favourite champagne.

We were astounded at the meat quality compared to what we have been seeing both in the Commissary on base, and even at Globus. I can’t eat pork (schwein) so my options off base have been more limited, the Germans love their pork! In France this wasn’t the case. We were able to get 6 pieces of fresh, good quality cuts of steak for under €8, and a huge packet of New Zealand lamb cutlets and steaks for under €10. Side note: I was always told growing up in New Zealand that we exported our best lamb, and that it’s cheaper overseas despite that. I’m looking forward to trying the lamb to see if this is true! We’ve decided we will probably do a shopping trip every month to Cora just for meat as a minimum! Below is  New Zealand legs of lamb, which will come in handy at Christmas time:

Rabbit for dinner? No problem, Cora has you covered (ew):

There was a large international section which had some of our favourite cooking items very cheap. 1kg of basmati rice was only €1,50, compared to €2,25 for 500g and Globus, and pretty much non existant at the Commissary. The fish section was huge also, which Nick was longingly gazing at: 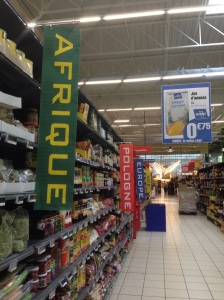 Toilet paper? What fragrance and colour would you like? I thought this was hilarious, and cracked up. It was funny seeing everyone walk around with the pink paper in their shopping carts, so we decided to buy a 12 pack to fit in:

The bakery section was incredible. They had to-die-for looking cakes, pastries and breads – as one would expect in France! Yes- that is Nick inspecting the delicious goods in the background. 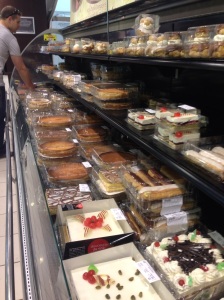 I felt like my countrymen, Brett and Jermaine off Flight of the Conchords. I was swooning around the baguette section like Bret in the following photo:

We were hungry, but somehow managed to contain our excitement at all of the goodies (well, knowing we are here for four years helps!) to just a caramel French éclair each. It was MOST enjoyable. As you can see, Nick loved it too:

My favourite part of the trip was driving past places I’d learned so much about in high school history class. We were doing our groceries in the Alsace-Lorraine province. This province was one of the causes of WWI and constantly moved between Germany and France, depending on whoever won the relevant war over the centuries.

The region was also heavily impacted by WWII.  Saint-Avold itself was a communications point for the Third Reich and was vital for enemy defenses guarding its borders. On the way into Saint-Avold we spotted an American war cemetery. Apparently this contains the most amount of American WWII fallen soldiers. We went to stop by on the way home, but unfortunately it was already closed. We’re going to visit next time we go to Cora.

So this, my friends, was our afternoon grocery shopping in France. It’s great how it doesn’t actually matter that we don’t know the language, either place we go to we know as little as the next, but it seems to be getting easier. We’re having fun learning the words for things in German, and now we can try them in French too!

4 thoughts on “France – off to do our groceries”